Well, the party’s over.

After almost 15 years of spinning at The Metropolitan Bar in Williamsburg, Brooklyn, the time has come to retire. While the decision wasn’t mine to make, the result is just fine by me. Don’t worry, ladies and gentlemen, Dario Speedwagon will still live on! Just not as a DJ. I bid you adieu, and long live rock ‘n roll! 🤘🏼

On the first Sunday of each month, “Pretty Vacant” crashed into the Metropolitan Bar in Brooklyn w/ DJs Dario Speedwagon and Mikey B. They made good on their promise to spin everything from Britney to Black Sabbath, and we all enjoyed some afternoon anarchy @ 5:00-10:00pm.

Before “Pretty Vacant”, DJs Dario Speedwagon and Mikey B rolled out some good times under the guise of “Divine Decadence.” Were you there?

Well, would you look at this – I was nominated for the “LEGEND” Award at the Brooklyn Nightlife Awards 2014! 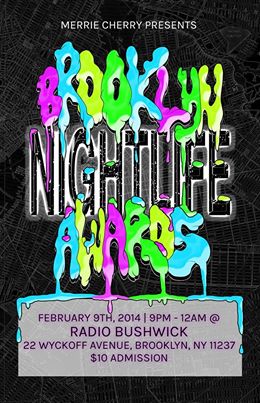 To say I was thrilled would be an understatement! I was up against showbiz legend Murray Hill, drag queen royalty Acid Betty, and new drag star Thorgy Thor.

And the winner was…Thorgy Thor! Of course, as any drag queen aficionado knows, since this award was bestowed upon her, Thorgy went on to compete in Season 8 of “RuPaul’s Drag Race” in 2016. She is now firmly entrenched as a bona fide star.

I was just so proud to have been nominated. Congrats to all of us!

Here was my statement on Facebook before the nominations were announced, which I think says it all:

What becomes a legend most?

As I contemplate turning 50 in 2014, I’m humbled to realize that my alter ego DJ Dario Speedwagon has been a part of Brooklyn nightlife for a decade now. With the Brooklyn Nightlife Awards coming up, perhaps you’ll help an old geezer out by nominating me for the LEGEND AWARD if you feel I have “paved the way in Brooklyn and have been in the scene for over 5 years.”

Thanks to the Metropolitan Bar, I have had three consecutive DJ residencies there since 2004 (“TNT,” “Filthy,” and the current “Divine Decadence”) as well as hundreds of gigs at a myriad of LGBT parties throughout the ‘hood and NYC including Sugarland Nightclub, This n’ That, Rockbar NYC, Nowhere Bar, Cattyshack, etc. My goal has always been to bring ALL kinds of people together in one room and create an environment of inclusiveness for everyone while spinning my trademark blend of “cock rock and pussy pop” for you to dance to. The Village Voice even named my previous weekly party “Filthy” the “Best party to get over silly gender issues at” in their Best of NYC 2006 issue. If you’ve ever been to one of my DJ nights over the past ten years, then you’ll know this to be true.

Although in all honesty, let’s be real – I’m not getting any younger, kids, and I really just want to be up on that stage with Merrie Cherry, if you wanna know the truth.

Blasts from the past:

Want a taste of DJ Dario Speedwagon? Of course you do…