You want rock n’ roll? You got it!

This is an excerpt taken from Extreme Indulgence, my 2002 NYC diary, as it pertains to the (in)famous rock n’ roll nightclub CBGB. Why, you may ask, am I including this post now? Well, I recently discovered an old photo of myself standing before a toilet in the club’s disgusting, graffiti-covered bathroom, and I felt the powerful need to share it. It is Thursday, after all, which means it’s time for “Throwback Thursday” or “TBT.” 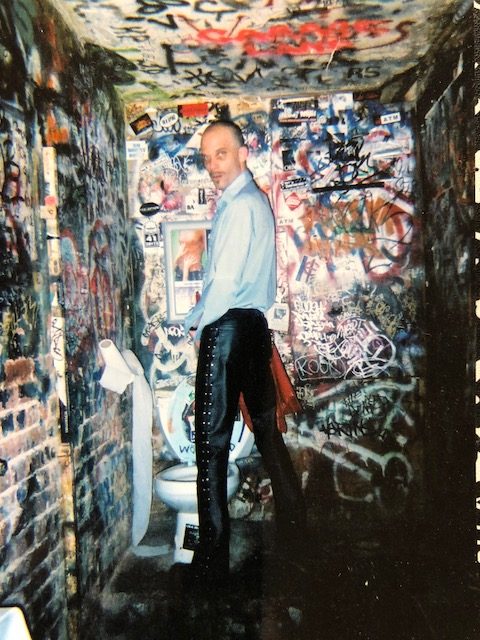 The name alone should send chills of glee and anticipation through your entire body. Say it again, with feeling – Homocorps. Ah, that’s it. For those uninitiated as to what this glorious evening is all about, well, I’m about to tell ya.

Fab party promoter Dean Johnson* (bald, 6’6”, always in a dress and big earrings) puts on a monthly rock ‘n roll bacchanal at seminal punk club CBGB’s for his fellow gay brothers and sisters. God, someone’s got to. Tonight’s Saturday night (10/19/02) lineup includes Lisa Jackson (cross-dressing ‘80s-cover-song goddess), Jonny McGovern as “The Gay Pimp,” Dean Johnson’s band the Velvet Mafia, and Lady Bunny (Wigstock) herself. And all for only $10. See, it tastes great and is less filling!

My buddy Christophe and I head downtown to Bleecker Street to Patti Rothberg’s abode beforehand and meet her new neighbor, Daniel Bauer, who turns out to be a magician. Okay, how many more interesting people can I possibly meet? Now it’s a gay magician, for crying out loud. Turns out Patti and Daniel are distant cousins and somehow related to master magician Harry Houdini himself. But of course they are.

Daniel is tall, lanky, successful and turns out to be a bundle of energy and craziness. We could be twins. Except for the successful part. The four of us tramp on over to the club on the Bowery and are met shortly by our tattooed friend Joe. And then 1-2-3, there’s the World Famous BOB again (I get a snapshot of us), and there’s JD Samson from LeTigre again (another photo). I am on a roll (photo pun intended).

Lisa Jackson’s set is (unfortunately) ending as we order the first of many drinks. Joe gets a shot of tequila but doesn’t do the Geena Davis shot-glass-maneuver trick from The Long Kiss Goodnight, so I berate him severely.

After a bit, I take Christophe downstairs to see the incredibly skanky bathroom so we can take pictures in there. The one of me mock-pissing in the toilet with my back to the camera and surrounded by graffiti and band flyers is an instant classic. There’s even a sticker with a pig on it, so we snort away out loud like the faithful and filthy little piggies we are.

Back to the show, we hang out like eager fans by stage right for Jonny McGovern’s act. He is a monster genius. In sunglasses, a headset microphone, a black tank emblazoned in glitter with “Gay Pimp,” and rhinestone-studded jeans, he is a full-blown creative creation. His act consists of ridiculously gay lyrics set to clichéd dance music with a cadre of deliciously underage-appearing chorus boys behind him. It’s like Ann-Margret on crack and I’m in a frenzy of love, jealousy, admiration, and shock. There’s a number called “Soccer Practice” with three boys in little uniforms who “go down” on Jonny, and there’s even a song about “retarded raver boys” complete with glow sticks and dance moves that would put Britney to shame (and he’s not even lip syncing).

After a break and more drinks, the World Famous BOB struts out to perform a striptease for the new millennium that’s got to be seen to be believed. When that bikini top comes off and those jugs are swinging, you think about the serious bodily harm that could occur if she belted you with just one of those obscenely gorgeous breasts. It’s a perfect warm-up for Dean’s band the Velvet Mafia, as is the jumpy white powder filling up the grooves on my key. Sniff. Suddenly, I’m crawling with energy and ready to form a mosh pit.

By the by, I’m still snapping pictures with my $5.99 disposable camera ‘cause how can I not document this night of all nights? Christophe even gets one of me backstage with the Gay Pimp – a dream come true. I want to be one of his backup dancers so bad, it hurts.

Then last, but not least, Lady Bunny finishes up the night with a long, brilliant set that has us rocking and rolling with laughter.

Not content to end the night, diehards Patti, Daniel and I stroll on over to The Cock bar, where it’s crowded and smoky and hot. This place is jumping, and so am I. Out of my ever-lovin’ skin. But what a way to celebrate Homocorps’ 3rd Anniversary. 🎉 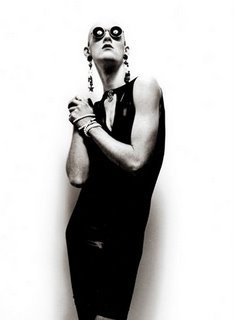