So, you wanna get hitched? 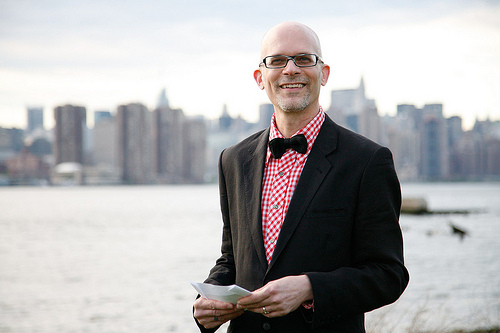 I can do that for you! Just call me Reverend Dario Speedwagon and, if you’re lucky, you may hear some ’80s song lyrics woven into the introduction and/or vows of your ceremony. Everyone’s is personal and special and catered specifically to the happy couple.

A pensive Reverend, concocting the perfect ceremony for your wedding… 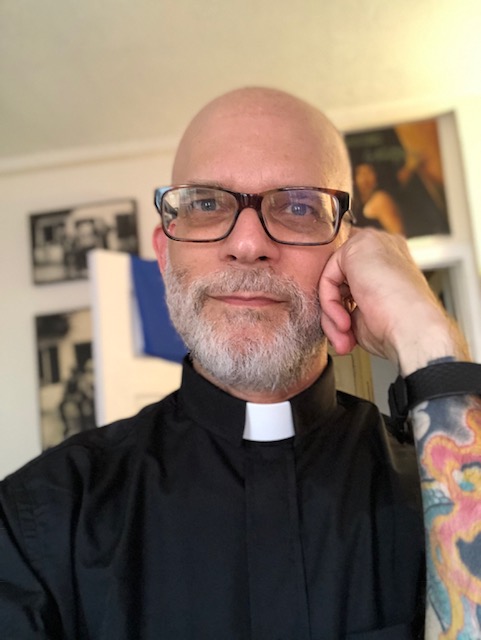 On May 7, 2011, I officiated the marriage ceremony of my darling cousin Keavy to her betrothed Bill on the banks of the East River in Brooklyn, overlooking the Manhattan skyline. Gorgeous. And the bride was pretty too. 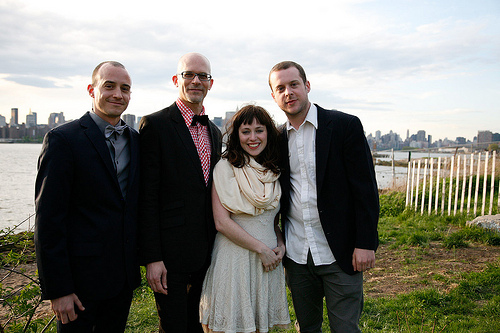 I love to perform LGBTQ weddings as well, especially since I was lucky enough to be able to marry my honey Michael Bailey on September 25, 2011! Here we are right after our love became legal: 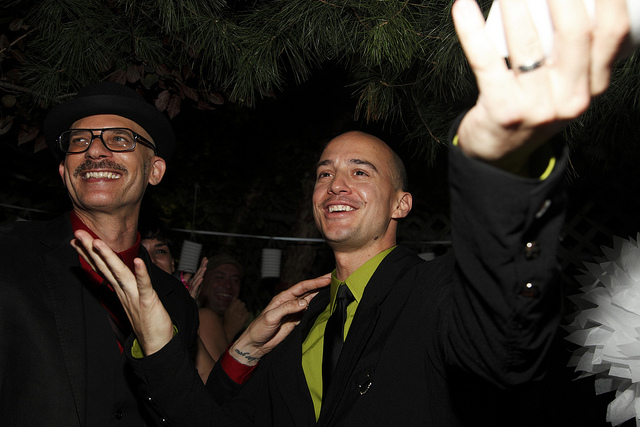 And on the historic date of 11/11/11, I performed my second wedding at Grand Central Terminal in the heart of New York City for two lovely ladies. They were treated to a grand reading by their friends of the lyrics to The Cure’s “Friday I’m In love.” So cute. Here’s what it looked like as it played out… 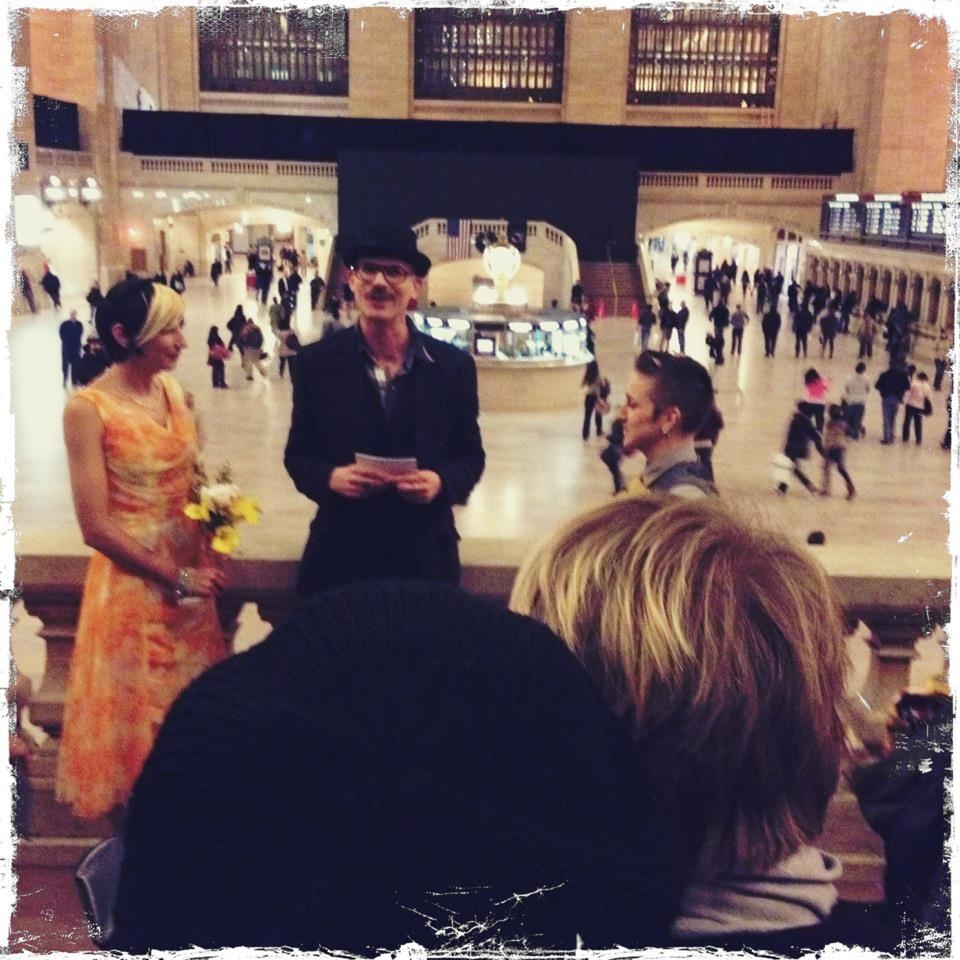 On June 2, 2012, I presided over the nuptials of Megan Dougherty and Jack Elliott at the historic Mount Gulian site in Beacon, NY on the banks of the Hudson River. It was quite the social event of the season, the largest crowd of wedding guests I’ve ever performed in front of as a Reverend, and a barn-stormin’ good time. 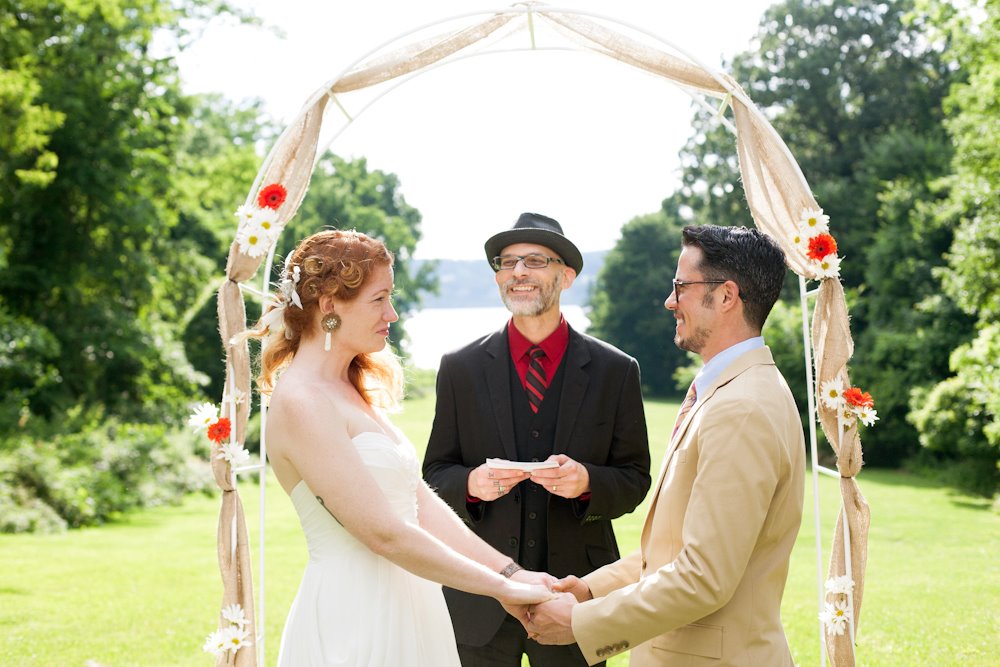 The next wedding I officiated was on Tuesday, August 28, 2012 in the lovely garden of the Upper East Side apartment of Liz Halakan and Sam Mahan. The couple threw a newfangled “Wedding for Two” which is becoming all the rage in New York City. The ceremony contains all the accoutrements of a real wedding but without the hassle of guests! The bride wore a stunning gown fit for a princess with only the groom, best man, and maid of honor present (besides me and the photographer). The setting was intimate, the mood charged, and the cost downright cheap. No parents, no relatives, no stress. Delightful. 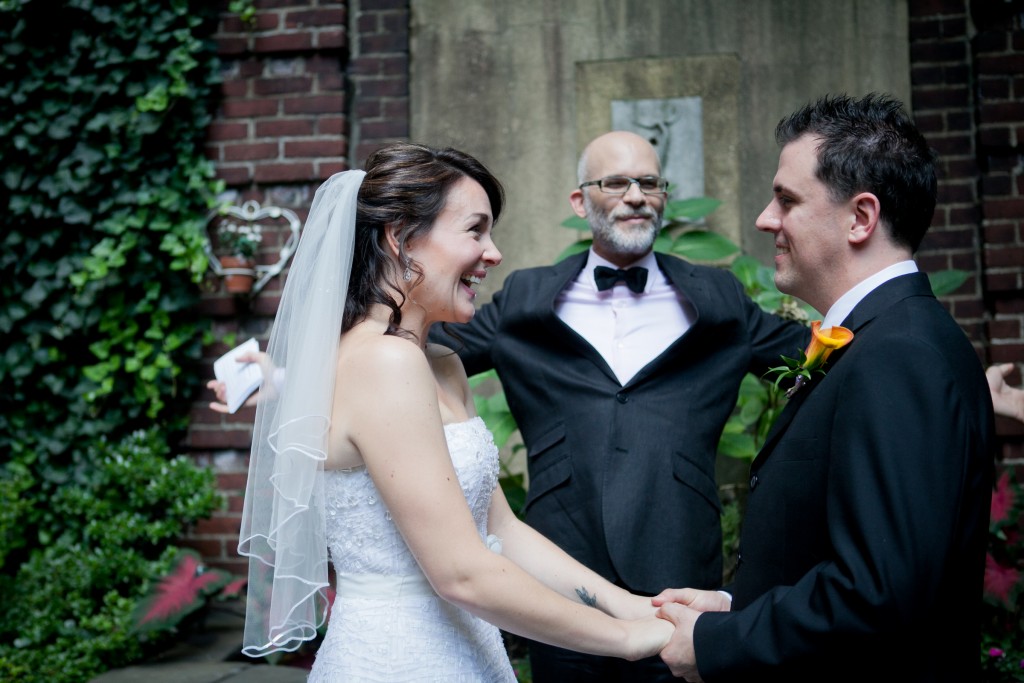 On Tuesday, August 27, 2013, I had my coolest/weirdest/gayest/easiest wedding to preside over ever. My friend Laura Eiko asked me to sign the marriage license for her and her bride Jackie, since they had failed to do so at City Hall. Sure, I replied. Well, we ended up at This N That, the local gay bar in Williamsburg, during the X-Men-themed Drink N Draw night, so the place was chockful of artists drawing four hot studs who were posing as live models. After a drink, we went outside the bar and did the deed right then and there on the sidewalk on N. 6th St. Amazing! The sun had almost set, the sky was purple, and the slight breeze felt lovely against our warm, sweaty skin. Once we went back inside, the evening’s host John Jennison announced the two girls and a wild cheer of goodwill went up through the bar. And here are Jackie and Laura with drag queen/performer Merrie Cherry, before she began hosting a night of Bingo. ‘Cause that’s just how we roll. 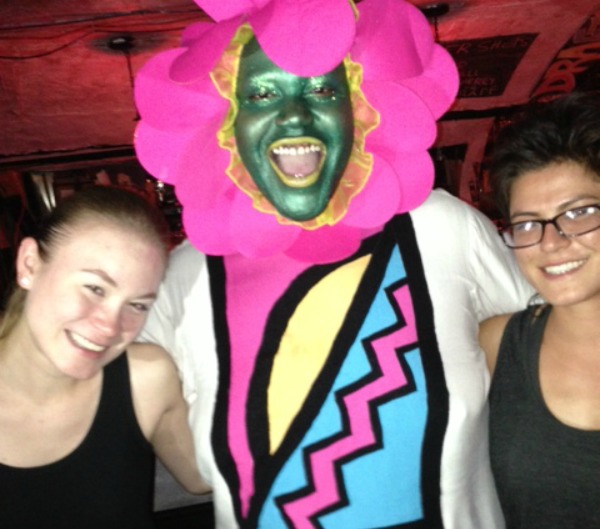 On Saturday, July 18, 2015, in 96-degree weather in Seattle, WA at Brass Tacks (Brass Tacks website), I married my cousin Molly to her girlfriend Kennedy. I have to admit, the wedding was one of the most spectacular and emotional I have ever witnessed. The girls had the genius idea of having their friends and fathers give toasts one after the other as part of the ceremony. There wasn’t a dry eye in the house! All I did was play emcee and read a sonnet I wrote, which went something like this:

From the day she was born, she’s been special to me

I could never imagine when she grew up, how close we’d be.

We cried over Miss Saigon, sang the entire soundtrack of Rent,

In sunny L.A., we both decided to stay

We attended expensive colleges where too much money was spent

Then New York called for us, a perfect place to play.

But when Molly met Kennedy, O, how I remember the day

We spent at the cabin, Molly regaling me with every detail

Of how brilliant this creature was in every way

That even I was intimidated; our meeting could not fail!

Then when I met her, I understood what Molly meant

For Kennedy’s got those intelligent blue eyes that mesmerize

They transported me to another world; it was no accident.

You’ve been under their spell too, I’m sure; they hypnotize.

Hanging with the Landreths can be most rewarding

And now, Kennedy, you’re joining the ranks of this clan

You know what this means, don’t you, my darlin’?

A heart of gold, they both sport one

And after today, they’ll legally share in all their fun.

So let’s hear no more of this Single Ladies bullshit

As Beyoncé once sang, if you like it then you better put a ring on it!

Okay, I cheated a bit on the sonnet, but I’m hoping that there are no sonnet purists around! Shakespeare might have been rolling around in his grave when I read this aloud.

My cousin Doug Landreth (check out his photography website here) took the beautiful photo below which shows the two fathers to the left, the brides in the middle, and the wedding officiant on the right: 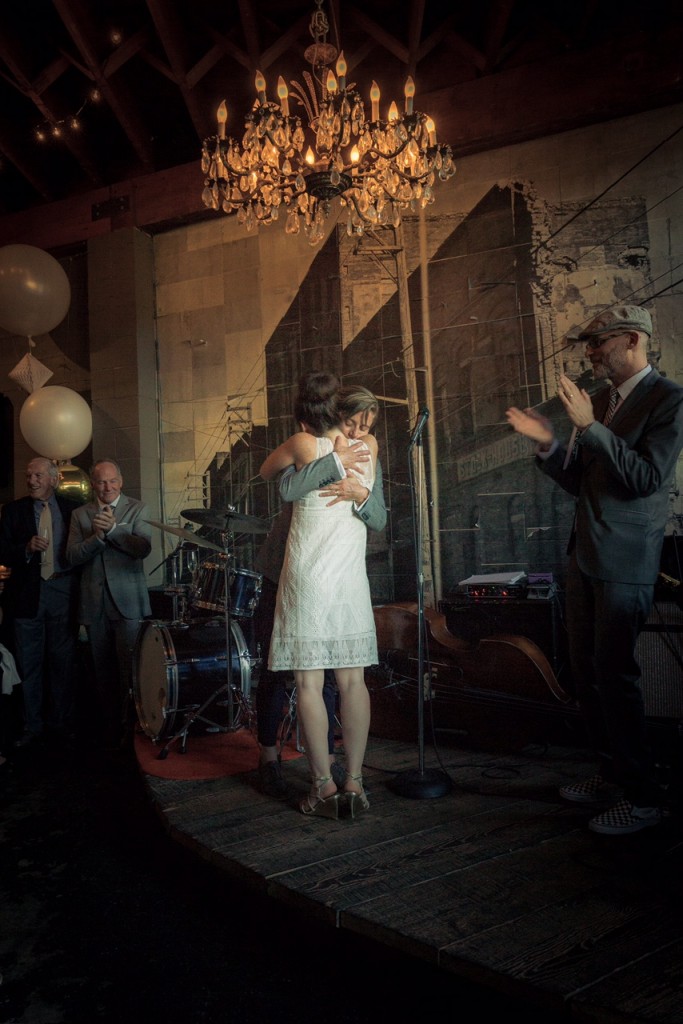 On August 21, 2015, I officiated the marriage of Christina Lowe to Ayman El-Eskandarany in Stroudsburg, PA at the beautiful Stroudsmoor Country Inn (see for yourself here). 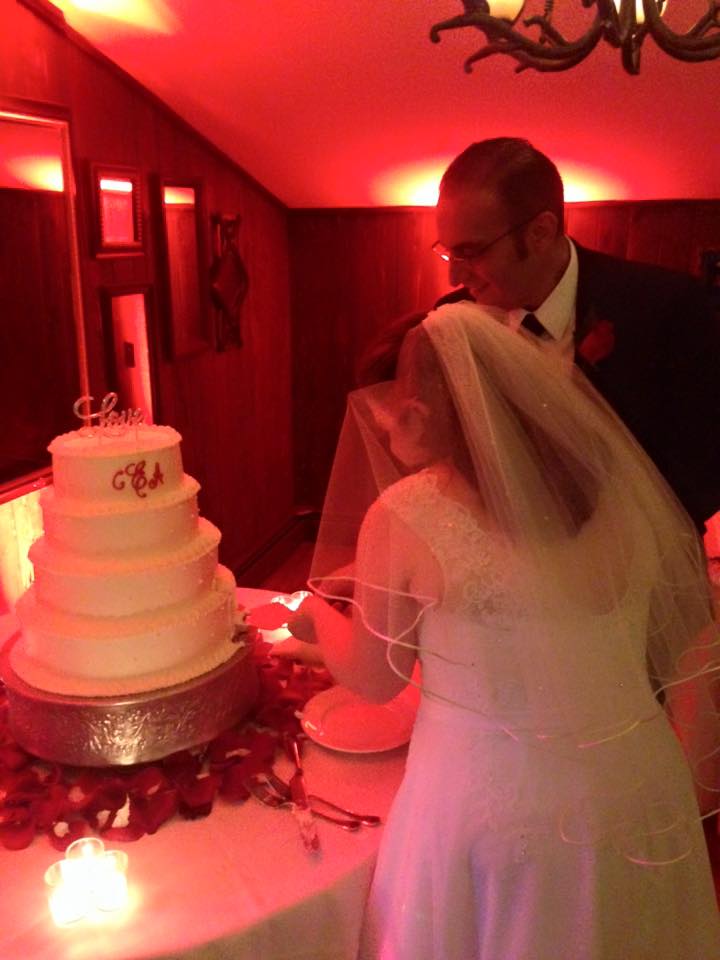 I’ve written an extensive Travelogue on my blog about the experience, so if you care to hear all the juicy details (for example, the DJ at the wedding asked if I was a priest or a politician!), check it out here.

Exactly one year to the date that they are to be married in a grand ceremony in Manhattan, I married my dearest friends and Greenpoint neighbors Kris Soong and Megan Koontz at our humble home, lovingly labeled Club Chavez 2.0, on September 2, 2016. My husbian Michael and his brother Ryan were the witnesses, and afterwards we strolled down the street to our local haunt Bar Matchless on Manhattan Avenue and Bedford Avenue, where the two lovebirds first met. I snapped this picture of the two newlyweds in the photo booth: 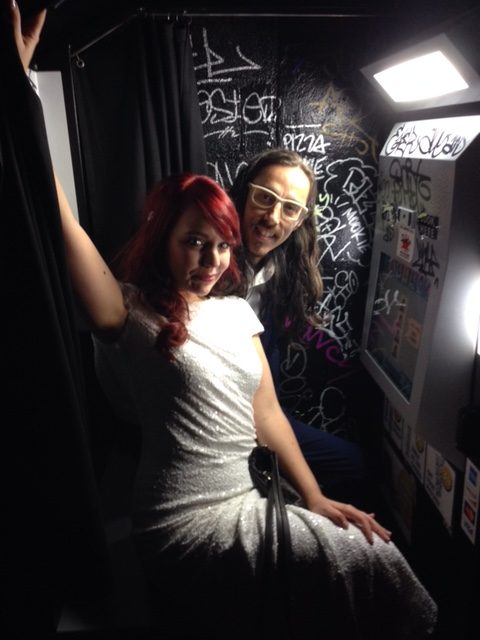 The following month saw me perform another wedding under the radar for friends Susan Toni (affectionately referred to as my “Sis”) and her fiance Norm Vino before their celebration in Canada in the summer of 2017. Ahead of their NYC engagement party at the bar Tender Trap in Greenpoint, Brooklyn on Earth Day (April 22, 2017), we strolled out to the pier at Transmitter Park in the sprinkling rain, where I whipped up a quick but meaningful service for my two dears. Yep, that means Suze cried. Congrats to the Toni-Vinos! 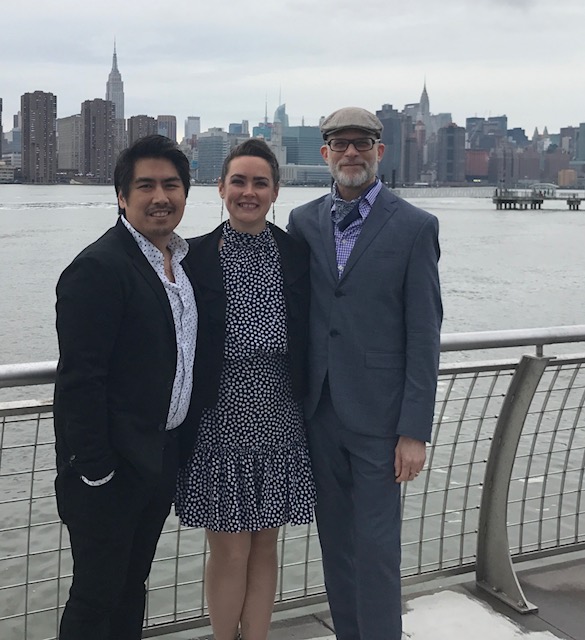 You could be next!

If I know you, and you want me to play a major part in your special day, contact me at rocknroll_heart@yahoo.com. I can be had for pretty damn cheap too. And look below – see, I’m official! 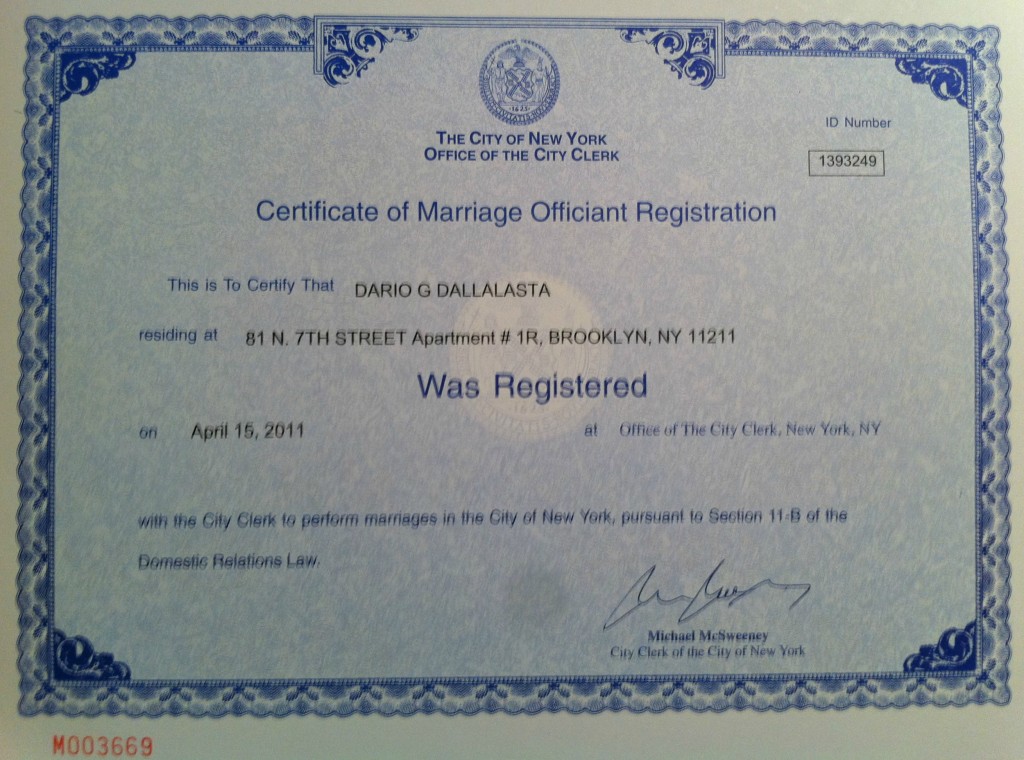 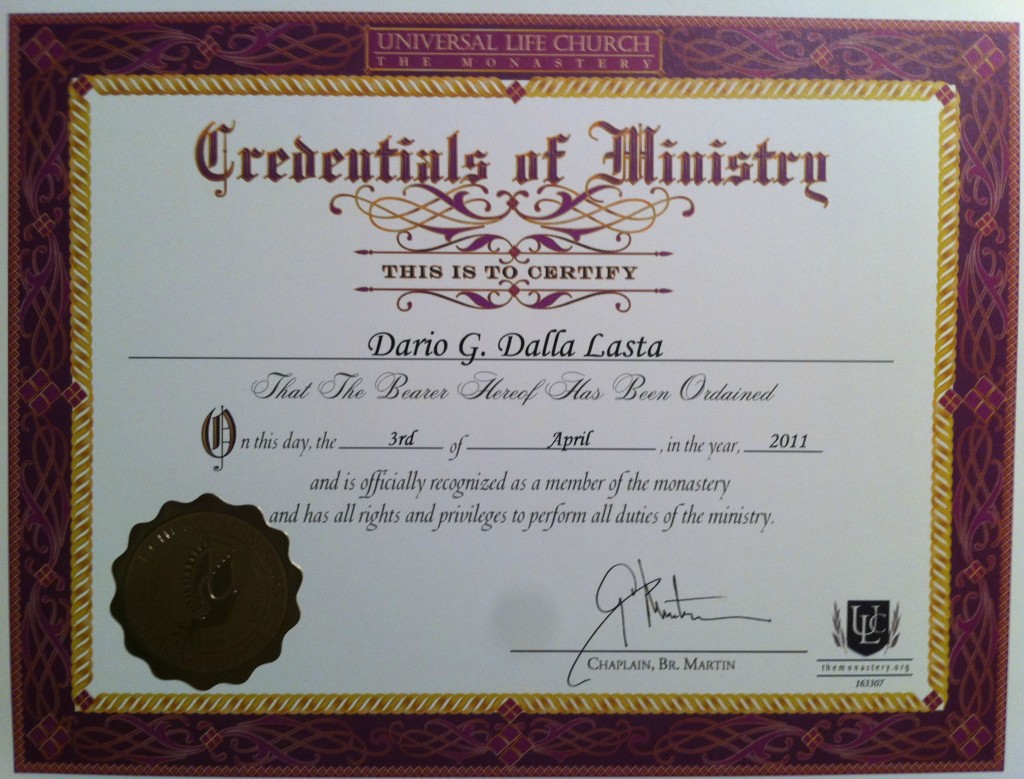