The lovely and talented author and editor Oleander Plume featured me on her website for her series “Super Heroes of Smut”! 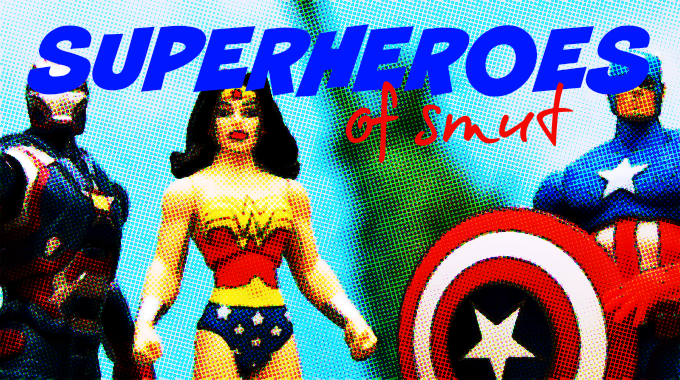 The entire piece is here on her website, but I’ll include my Q & A as well:

Oleander Plume: How long have you been writing, erotica or otherwise?

Dario Dalla Lasta: I’ve always been a bit of a dabbler with writing, but found myself writing with a feverish intensity in 2008 when I landed a job that allowed me the freedom to write. Okay, maybe I was bored at work with too much time on my hands and not enough to do, but the Devil took those idle hands and spun pure erotic gold out of them. Like a fever dream, I began to write a story that seemed to flow from my pores. I had no idea where it was going or what I wanted to say or what I was going to do with it; all I knew was that I had to get it out. Before I knew it, I had completed an erotic novel. However, I had no clue what to do next. I really should have stepped back, taken a break from the story while still keeping up with my writing, and perhaps found a friend to read it and help me edit. Instead, I was so green that I just started submitting it to publishers! Nothing happened, of course, but instead of being totally discouraged, I decided to charge ahead and self-publish in order to get it out in the world. That was all I really cared about at the time. And that is how The Three Red Lines was born in 2009, a sexual odyssey involving friends in New York City who follow a disturbing dream into hallucinatory reality. My goal was to make the journey that all four characters take as life-altering, sexual, hair-raising, humorous, creepy and uplifting as possible. I’m not sure I succeeded – it’s quite a mess – but I had a great time writing it! (Note from Oleander: It’s not a mess – it’s a great read!)

After I published the book through lulu.com, I started writing another one almost immediately. After all, I was on a roll. Thankfully, I realized I needed help to further my newfound love of writing, so I decided to apply to the Lambda Literary Foundation’s writing retreat where I was accepted as a Fellow for the Summer of 2010. It was my first writing workshop, and I’ll be forever grateful to my fiction mentor Nicola Griffith and my fellow classmates for helping me understand and try to tackle the beautiful beast that writing truly is. To be surrounded by a group of LGBTQ people of all ages and colors during such a formative time was truly an exquisite experience.

OP: Tell us about your writing process – do you outline, or just sit down and go for it?

DDL: As for my writing process, I usually do not outline; in the past, I have functioned better by just writing off the cuff and letting the story take me to places I never planned. Alas, I’m not in that previous job that afforded me all that free time to write at work, so I’m afraid I’ve had to be a bit more prepared with my future stories. I still find it difficult to outline though. That being said, I’ve found that once I get to a certain point in the book, I end up jotting down lots of notes, and those usually point me in the right direction.

OP: Is there a sub-genre you haven’t explored yet, but would like to?

DDL: What a great question – and a tough one to answer! Either a book sucks me in or it doesn’t. I’m an avid reader, and I find that only a few books in the past have ever caused me to stop reading, either due to poor writing, lack of focus, a despicable narrator, or some combination thereof

OP: While writing, what is right next to you? AKA: describe your work space.

DDL: My fervent wish is to someday have my very own writing nook! Unfortunately, at this point it’s either my work cubicle (yawn) or the couch in my living room at night while my husband snores softly in the next room. When home, I insist on background music (usually classical or classic rock, depending upon my mood and what I’m writing at the time). Also, it’s imperative that our dog Chavez is snuggled up next to my leg. Having that little cuddlebug close to me gives me the strength to keep going.

OP: Can you tell us about your latest work in progress?

DDL: I’m hoping to begin editing a book for publication shortly – it’s with my publisher already! Other than that, I have two unfinished pieces that have been limping along for a few years now, which I need to dive back in to as soon as I get the inspiration to do so. Someone, please send me inspiration! Pictures of hairy men in Speedos help (wink wink).

All right, you heard the man, send Dar some sexy hunks on his Twitter, I for one want him to finish this book so I can get my greedy eyeballs on it!!

Thank you for having me on your website, Oleander! xo