A Fallen Angel in Greenpoint:

Graffiti, Goof Off, and God

Several days ago, an angel visited me.

I didn’t recognize him at first. He wasn’t sporting golden wings that sprouted like feathery tufts of hair from his shoulder blades nor did he arrive upon the rush of a mighty wind. There was nothing otherworldly or spiritual about him or his arrival, and he wasn’t beautiful or exceptional in any earthly way. Just the opposite; he was wizened and weathered, and what little hair he had blew about his balding dome like snow drifts. In short, he was nothing to look at and no one I would even consider speaking to. Which is why I’m going to spout that hoary and overused cliché: You can’t judge a book by its cover.

As we all know, this phrase can relate to many other subjects besides books; take people, for instance. When we first begin to understand this cliché, as children, we are taught that this relates primarily to appearances, to people’s looks. Their “cover.”

My physical “cover” on this otherwise unremarkable Saturday afternoon in Greenpoint, Brooklyn is the Dickies jumpsuit I slip on to start working on removing graffiti from the storefront windows next to my apartment at the request of my landlord. 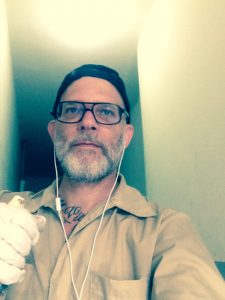 I’m already the janitor of our apartment building so I do other odd jobs for him as well. This specific one, at least to me, is a Herculean task that I’m both unprepared for and unqualified to perform. However, I’m in possession of everything I think necessary for the job: a spray can of Goof Off (seriously, one of the best names for a product ever), work gloves, earbuds to listen to the Violent Muses album by Black Sugar Transmission (my current obsession), and a bag of rags. According to the hardware store employees, all I need to do is spray a generous splotch of aerosol on the strip of material and rub it on the window. I do as I’m told. Unfortunately, the thick residue of the tag barely fades. Goddamn it, I think, wanting to scream. At this point I’ve resigned myself to the fact that I can only eradicate so much at one time before I get too fatigued or frustrated or flustered by how truly “un-handy” I am. I’m a creative type, I’m certainly not gifted with technical or manly abilities.

Regardless, I’ve got lots of work to do, so I begin in earnest. In something like five minutes (I’m barely into the second song on the album, which happens to be my favorite), I spy a man behind me reflected in the glass who’s trying to catch my attention. Ugh, I groan. I can’t hear anything with my music blaring so I decide to ignore this person, only to realize he’s still standing there, waving his hand and probably babbling something incoherent as so many of the older, mostly drunk, Polish men in my neighborhood do on a recurring basis. Sighing, I stop my music and pull my earbuds out, assessing him quickly to determine my next move. Before me stands an older, stocky man with his two front teeth missing. Homeless? Wasted? I calculate him to be one or the other in my jaded mindset. How could he be anything else? Maybe he’s a self-reputed “mayor” of Manhattan Avenue who doesn’t want me to clean the front of this particular establishment. He’s garbling words with such a heavy accent that it takes my brain time to adjust until I understand that he’s explaining how best to remove the graffiti from the glass door that I’m working on. When I finally begin to listen, he tells me I need to get a razor to scrape the graffiti away, spray the Goof Off, then wipe everything down with Windex and a paper towel. I thank him and begin to turn back around, but he keeps jabbering at me and says he’ll be back. Please don’t come back, I think as I begin my laborious routine with the rags and the Goof Off again.

In about ten minutes he’s true to his word and comes back. With a razor. Immediately he swoops the blade through the loops and swirls of the spray paint and, miraculously, the graffiti slides right off, curls up, and falls to the ground like wood shavings. I gape in silence, then start babbling too, thanking him profusely over and over again. He nods and keeps working as I continue to just stand there, more or less helpless. He scrapes the entire design away, then sprays Goof Off all over the area he’s just worked on and lets it sit. The next time he applies the razor to the window, the residue wipes clean. I’m shocked and so grateful I could weep. Instead of crying, and in a spirit of spontaneity and honesty, I state, “You’re my angel. You really are. Thank you for coming here and helping me when I needed it. Really, I’m not kidding! Thanks again for being my angel.”

Chuckling, he replies, “A fallen angel, maybe,” and I laugh along with him. He is a fallen angel, come down from seemingly out of nowhere to save me in my moment of peril, in addition to throwing some knowledge and compassion my way. Right at this moment, the cliché, You can’t judge a book by its cover takes on a deeper meaning for me. It becomes personal.

I’m humbled by my own prejudice.

Suddenly, a middle-aged woman with steel grey curls and colored plastic-framed glasses rushes up to our work space, scolding him in a foreign tongue, and we both jump. There had been several minutes of comfortable silence between us where I didn’t feel the need to speak. He muttered under his breath now and again, and perhaps some of those words were even meant for me; although I didn’t understand them, I wasn’t required to.

Like me, he appeared to be shaken out of his reverie by this intrusion. He recovers rapidly, however, and starts verbally sparring with this woman, who is more than likely his wife. After a heated exchange, she storms off down the sidewalk after accusing him—in English, no doubt for my benefit—of working for free since I’m not going to pay him. Which is true. All I have in my jumpsuit are my keys. I shrug, embarrassed, and we both stand there until I promise to grab some Windex and paper towels to complete the job. Essentially, he has cleaned all the graffiti off that one glass door without any of my help. I’m about to compliment him when his “better half” clomps back over and promptly marches him away. He’s left me with the razor that had since become dull from use and advised me to head to the hardware store to buy more of them. “Of course,” I vow.

As he takes off across the street and slips into the driver’s side of a black SUV, I stand there watching him, perplexed. For several minutes I stare, unsure of how to say goodbye. Do I wave as he pulls by? I want to, then a municipal bus pulls up and blocks my view. My moment has passed. I gathered my cleaning supplies and take care of what I promised; I clean the window with Windex and paper towels. I even sweep the stoop. The area looks pristine and I feel proud. Proud not because I worked hard to achieve such a pleasant result; proud because I accepted the gift from God that I needed at that moment. I was present. I got it. And now I knew how to finish the job. All thanks to my fallen, toothless angel.

See, you can’t judge an angel by his teeth. Or lack thereof. 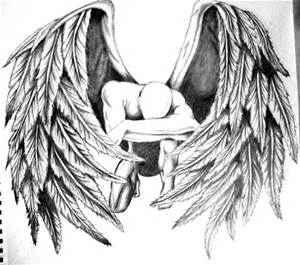 P.S. Check out the storefront windows now! They are 100% graffiti-free. 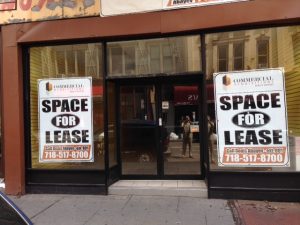