Pansy Division – Live and In Person!

You know how they say you should never meet your idols? There’s a reason behind that adage–most of the time, when you do actually meet an idol of yours, it tends to be disappointing in some way. Perhaps said idol is a bitch. Or too short. Or has bad breath. Maybe your expectations are just too damn high. Whatever the reason, this star/celebrity isn’t everything you thought he or she would be. And that’s disappointing in and of itself. I know this first-hand.

I worked for Barbra Streisand.

For about six months, January through June 1990. A time I’d rather forget about it, to put it bluntly. But that’s another story.

Last night I met an idol of mine–and he blew my expectations into smithereens.

Pansy Division, that seminal gay punk rock band from the ’90s (made infamous by supporting Green Day on their “Dookie” world tour), played at the Bowery Electric last night, and Michael and I went to see them. 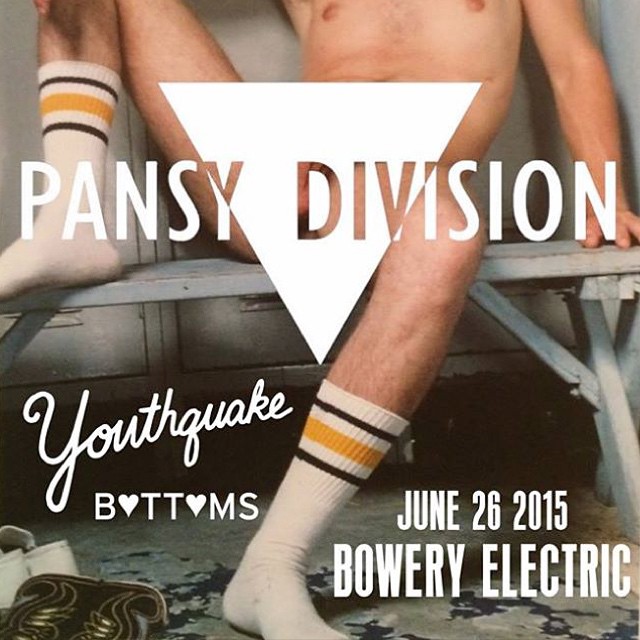 First off, I never thought I’d see this band play live. See, I’m a newcomer to the Pansy Division gang, and they haven’t played New York in six years. The chances of seeing them reunited and playing in NYC seemed far-fetched. Yet here we were, gathered together with about 100 fans in this tiny performance space, all joining together to witness this raw and powerful rock and roll band melt our faces.

As opening act Youthquake performed before Pansy Division came on, I whispered to Michael that I was going up the stairs to the bar area to buy a shirt, as I saw a merch table there when we ordered beers. There it was, a tiny table set up with a cooler behind it as a seat of sorts. No one was manning the table, so I just peeked around. They had a bit of everything: CDs, the DVD of their documentary “Pansy Division: Life In A Gay Band” (check it out here), LPs and — just what I came for — tee-shirts. I’ve been wanting a P.D. shirt ever since I discovered them a few years ago. Those things are impossible to find! Not to mention expensive; there are a few on eBay that are like $200. Needless to say, I was prepared to buy as many tee-shirts as they had to offer. My wallet was stuffed with $20 bills. Give me one in every color! Well, I only saw one and it was gorgeous–soft heather gray material with a super badass design. 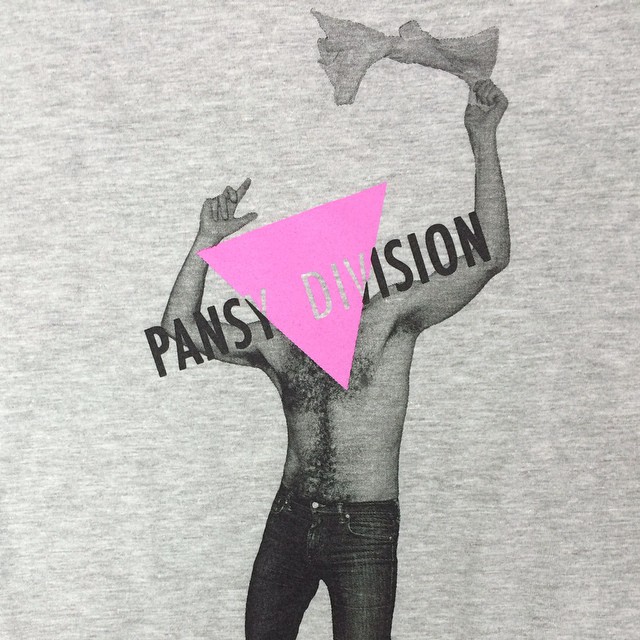 Exactly what I wanted.

Finally some small dude excuses himself behind me so that I can move over and he can swing in behind the table to sit on the cooler. Like I said, he was tiny and wore nerdy glasses. I asked for a Medium shirt and gave the friendly man his money. I stood up and hesitated before leaving. Turning back around, I squatted down on my haunches and asked, “Do you think Jon would sign my copy of his book after the show?”

He gave me a quizzical look and smiled. “I can sign it now.”

It was Jon fucking Ginoli. The singer/guitarist and fucking founder of Pansy Division.

“Oh god, I’m sorry!” I sputtered, clutching at my heart. “I didn’t recognize you!”

“It’s the glasses,” he said, pointing to his eyes.

“Please, tell me about it, I know,” I replied, gesturing to mine as well.

We laughed. Jon and I were laughing together! From that moment on, we talked like friends for about 15 minutes.

And as for meeting one of my idols, he did not disappoint in any way.

Far from it. He was everything I wanted him to be, and more — charming, honest, smart, self-deprecating, and exceptionally wonderful. I spoke to him about so many things that I never thought I’d be able to say to him face-to-face: I confessed that I was a new fan and told him that his music would have saved me from a lot of pain and struggle in the 1990s if I had only known (he said that he hears this same scenario from a lot of his fans); I told him how great his autobiography was and how jealous I was that he remembered every detail (“I didn’t drink that much back then,” he said with a twinkle in his eye as he lifted up a glass of whiskey in a toast.); I gushed with admiration over the band’s last CD “That’s So Gay” (2009), and Jon said he thought it was one of their best efforts (I couldn’t agree more! Get it here!); and I squealed like a girl when he said they were about to go into the studio to record a new album. What great news! Six years is too long to go between albums. He also confided they’d be playing two new songs later, and I almost squealed again. He was so approachable that I could totally be myself with him, even though I consider him brilliant. And super fucking punk rock in every way.

When I handed him my copy of the book for him to sign, he asked my name. When I told him, he quipped, “Oh yeah, I know who you are.” I almost freaked out. How did he know me? I could only think of two possibilities: one, his bandmate Chris Freeman plays in a gay AC/DC cover band called GayC/DC with one of my L.A. friends Karl Rumpf. I’m thinking Karl may have told Chris that I would be at the show. The other possibility could be my presence on the band’s Facebook page “Horny in the Morning: The Official Pansy Division Group” (stalk here). I tend to try and post something or “Like” some of the comments as much as I possibly can without being considered a stalker. It doesn’t help that the banner photo on my own Facebook page is a Pansy Division logo. Yep, stalker. 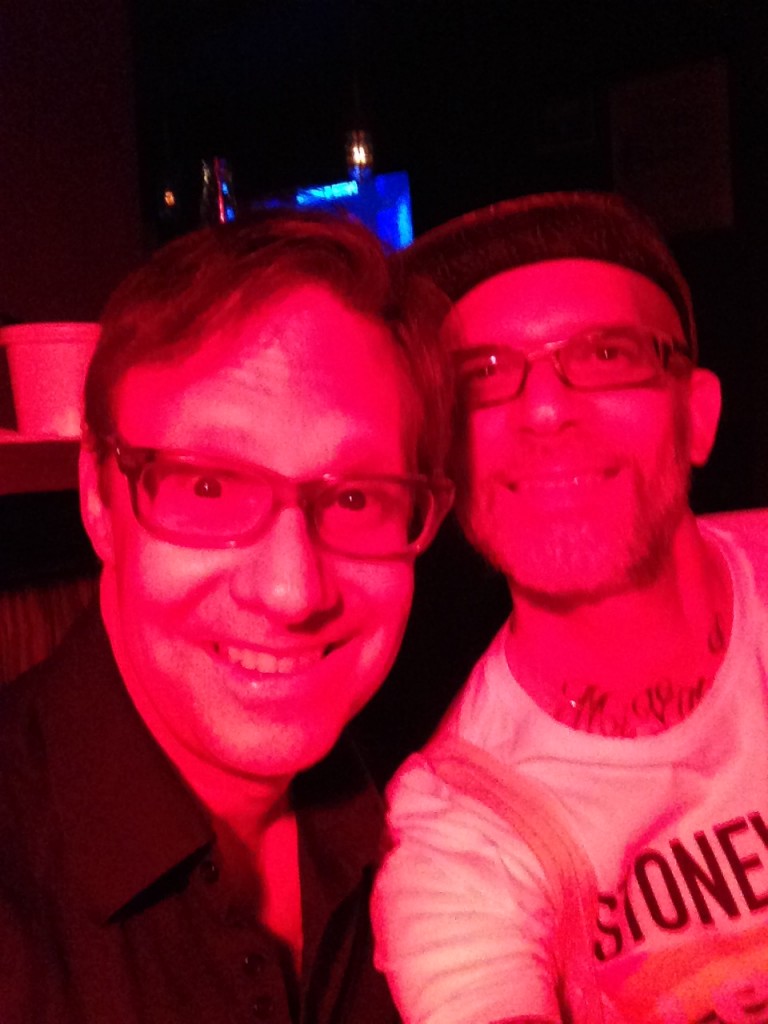 Anyway, here’s what Jon wrote for me on the first page of his 2009 book “Deflowered: My Life in Pansy Division” (the must-read is available here):

That’s right – history was made yesterday, with the Supreme Court ruling that gay marriage is legal in all 50 states! Woo hoo! #LoveWins

As an aside, Michael and I had the pleasure and privilege of going to the Stonewall Inn earlier that afternoon to celebrate the decision from SCOTUS and POTUS. Stonewall had also just been named an Historical Landmark, and since it was also the start of the LGBT uprising, we knew that being at the epicenter of the gay movement was the place to be. To think, we could hop on a subway train from Brooklyn to Manhattan and be RIGHT THERE in like 35 minutes. There, in the heart of it all, with a huge slew of supporters and camera crews and microphones and music being pumped out to Christopher Street, which had been closed for the occasion. “Born To Be Alive” by Patrick Hernandez blasted through the air. I was proud of my city and my life and my husbian and thrilled to be a part of it. History!

One big step forward for equality throughout the land, and a personal one-on-one with one of my heroes, a hero to me in so many ways. 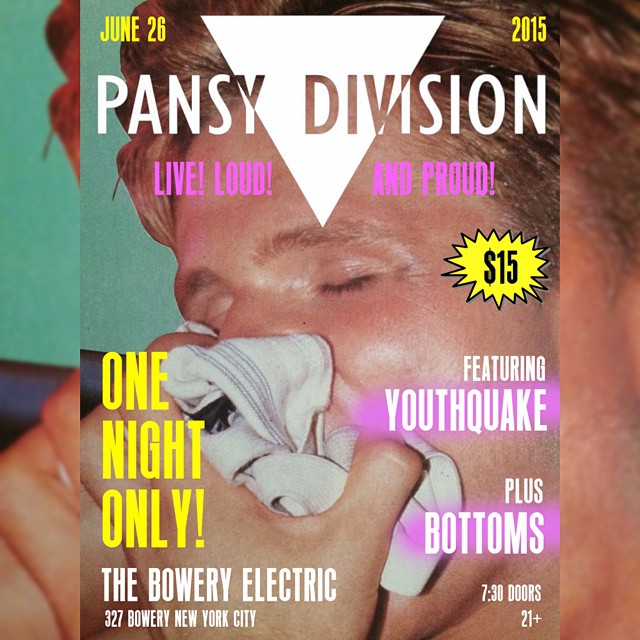 Here’s the band in action: 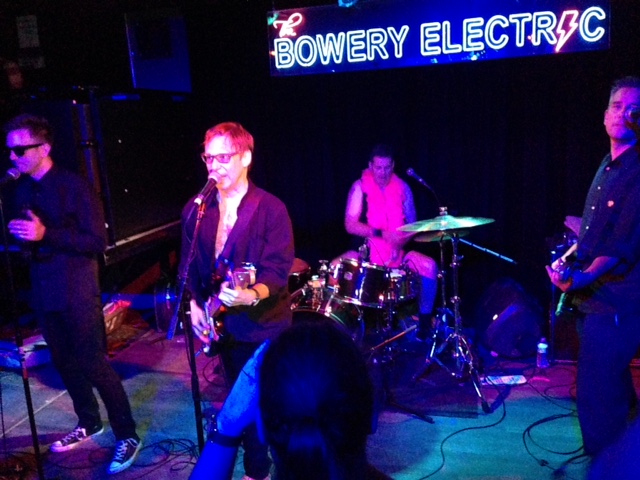 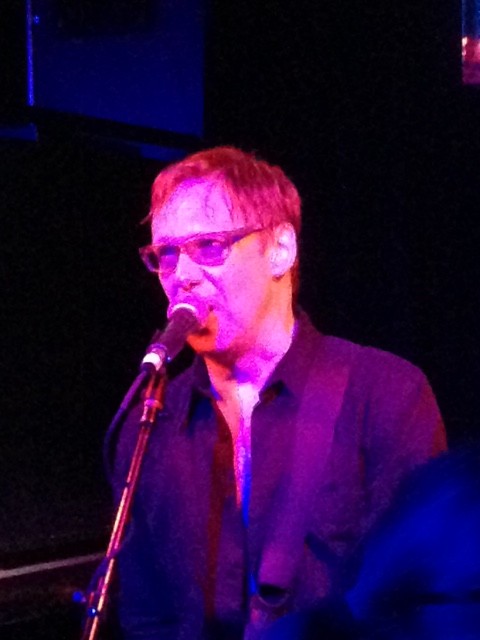 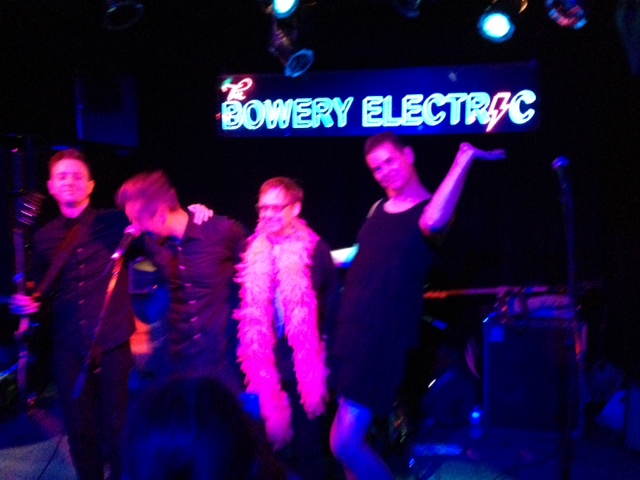 P.S. Before you think Jon can’t get any cooler, he graciously accepted a copy of my book “Squeeze Pants.” As a writer, I almost swooned. Blown. Away. 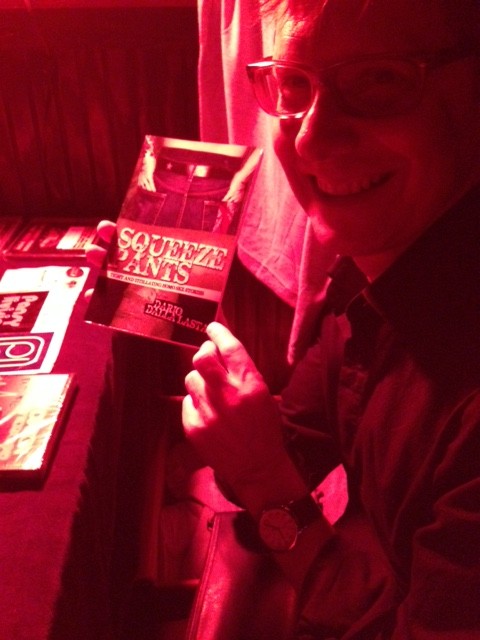 You can get your very own copy here, by the way.

One more thing. I also bought a copy of “Rocky Horror Punk Rock Show,” a Rocky Horror tribute album interpreted by such punk bands as The Ataris, Alkaline Trio, Groovie Ghoulies, and, of course, Pansy Division. 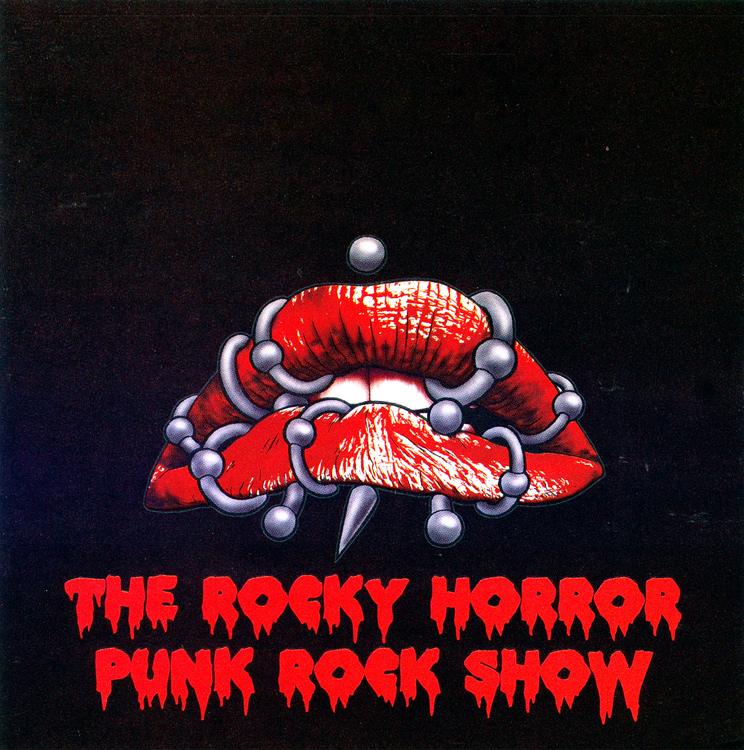 Their interpretation of “I Can Make You A Man” is wildly inventive and fun and different. If you’re a fan of Richard O’Brien’s classic musical score, you will LOVE this album retelling. I listened to it three times in a row while writing this post. That’s how good it is. Info here.

5 thoughts on “Pansy Division – Live and In Person!”