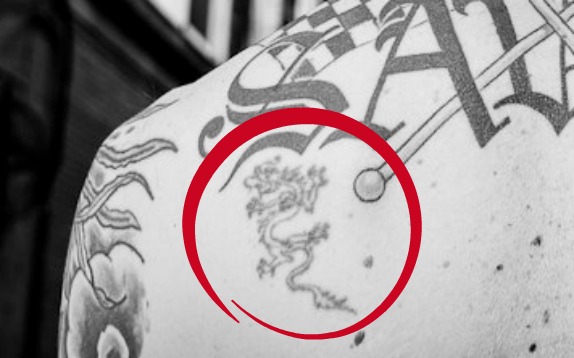 In May of that year, “Nothing Compares 2 U” by Sinead O’Connor is Number 1 on the Billboard charts, a new movie rating called NC-17 is introduced in order to differentiate from X-rated pornographic films, and Angela Bowie reveals that her ex-husband David slept with Mick Jagger.

At this same point in time, an eager 24-year-old law school graduate, freshly minted to practice law in California, is about to be married June 16th at Pepperdine University’s picturesque chapel in the coastal town of Malibu. A heady time for a young man to say the least, especially with the oncoming onslaught of a major “rite of passage” that one encounters in life, the Big M. After graduation from high school, college, and law school, it seems like marriage is the next logical step and, as the above-referenced 24-year-old, I find myself asking, What else could possibly be next?

Getting a tattoo, that’s what.

These milestones of graduation and marriage, ones that I was brought up to cherish and aspire to ever since I was an altar boy at the local Catholic church, end up paling in comparison to an event that takes place on a balmy Spring evening, a seemingly random rite of passage followed by such disparate groups as drunken frat boys and mourning mothers to Hell’s Angels and bruised strippers. This would be the fateful night I first hear the buzz of a tattoo machine and feel the sting of a needle burrowing into my skin, marking the occasion forever.

This is the night of my first tattoo.

Getting a tattoo was my idea. Always trying to act the “bad boy,” I had been thinking about it for some time (let’s just say since 1980 when I began idolizing rock stars during my sheltered teenaged years), and when I finally tell my fiancée Joy that we should both get inked before our wedding date, she agrees. This comes as quite a surprise because she only possesses a tiny wild streak, nothing like mine. Although I have been raised with the belief that tattoos are a horrible stigma covering the likes of dope fiends and hardcore bikers, I hold my own views on the matter. In my mind, tattoos are a visual sign to the world that I can be a rebel, yes, but of the sensitive, artistic variety. If cheesy one-hit wonders on MTV can get them, why can’t I?

With only a modicum of persuasion, I convince Joy to share in this bonding moment with me and entice her to take a walk on the wild side before we become “one” in the eyes of God and the law. “Why not flirt with danger before settling down?” I taunt her.

Because we are frightened novices who have never stepped inside of a tattoo parlor until that instant, we are drawn towards the safest, most stereotypical designs. The artwork, just simple drawings plucked from one of the many plates of flash tattoos in the reception area of Sunset Strip Tattoo, couldn’t be more obvious—a dragon for me, a rose for her. No doubt our artist rolled his eyes. I could gag now, looking back at our clueless choices. The two of us decide in tandem to place the work on our left shoulder blades due to the ease of hiding them and the lesser risk of pain. Little do I know that this one small act of rebellion will end up chaperoning me more than two decades into the present day to become an indelible part of who I am, so much so that while my body is now covered with permanent ink, everything else from that year has faded away into an ethereal wisp of nothingness.

When the needle first touches my skin, I’m hooked. The pain doesn’t faze me. A mere cat scratch, I decide, nothing more, nothing less. For the first time, I feel like a true man. Okay, maybe not a toughie from the streets but, at the very least, an average heterosexual male on the brink of marriage and a lofty career. Deep down, however, the truth nags at me that I’m nothing more than a book-smart homo hiding behind a carefully cultivated Catholic image. For nearly a quarter of a century I have hidden behind a façade of who I am supposed to be, and then twenty minutes after we take our seats on cheap fold-out chairs, that needle has buzzed its way into my tortured soul and ripped a tear in my very existence. The deed done, there is no turning back, and nothing will be the same again. Of course, I don’t know that I’m a changed man at the time. There is no immediate epiphany, just a tingly rush of endorphins mixed with bravado. Afterwards, the two of us toast our ballsiness with pints of imported beer at the tourist trap of a tavern next door, believing it to be the seediest-yet-coolest bar ever. Now it’s my turn to roll my eyes.

Flash forward a few years from 1990; three, to be exact. I ask for a divorce and get one. Not only is it uncontested but I complete the legal paperwork and court filings myself at no charge. I’m free! While not truly “coming out” quite yet, I do end up getting another tattoo one Sunday afternoon as I’m out rollerblading on the Venice Beach boardwalk. Once again, not knowing any better, I choose another flash tattoo from the wall. The freedom of submitting my body to another tattoo is exhilarating, and I begin to feel part of a different counterculture beyond the gay one I’m acclimating to. This time I choose a scorpion design for my right deltoid above the bicep. Since Scorpios are known to be an extremely sexual sign of the Zodiac, the selection is quite appropriate at this stage of my life even though I’m a Virgo (the Virgin, no less).

The idea of picking out a tattoo to represent my coming out as a gay man hasn’t even crossed my mind yet—all I know is that I’m passing from one stage to another, evolving like a chrysalis to a butterfly, and slowly I realize that scoring new ink each time I move forward is a wonderfully creative and unique way to chart my ever-growing progress. Tattoos give me confidence and toughness, two qualities sorely lacking in my life, and they gradually lead me to a look I had only dreamt of embracing. Rejecting the life of a lawyer to work in the music business, I shave my head, slap on a pair of black vinyl pants, and head out night after night to seedy rock bars and sexually-mixed dance clubs. I start mosh pits to Nine Inch Nails songs and befriend young, fabulous creatures in smeared makeup and feather boas. Feeling bolder by the minute, I get another tattoo, a Chinese character or kanji meaning “Heaven” on my left inner arm. “Because it’s heaven in my arms,” I joke. What it really means is that instead of holding out my religious upbringing at arm’s length, I choose to embrace it.

By the time I meet Zack, my first serious boyfriend, we end up side-by-side in a tattoo shop on Melrose Avenue in West Hollywood inking half-sleeves on our arms. This is who I am now, what I’ve become. That shy, bullied, knobby-kneed, long-haired, girly boy from Sacramento has grown into an L.A. man that likes what he sees in the mirror. For once. Colorful ink covers my skin like a coat of armor, protecting me from assholes and insecurities. After a cross-country move to New York City with Zack, I finish the entire sleeve on my left arm. After our jarring and unexpected breakup six months later, I fully sleeve the right one.

And the tattoos continue.

For every rite of passage in my life, I get another one. And another one. Sometimes I get a tattoo for no reason at all except that I want one, my body knowing when it’s time. A stream of tattoo shops from Chelsea and the Lower East Side in Manhattan to Williamsburg and Greenpoint in Brooklyn become my homes, my escapes. Soon enough, tattoo artists become my friends and family. I find refuge from my daily routine and view every appointment as if captured in that one time and place under a glass jar. Tender new spots are discovered on my body that I didn’t even know existed. When I’m under the needle, I’m alive in a way unlike any other sensory experience.

When I finally meet a wonderful partner-in-crime named Michael in 2005, the word “Saved” becomes emblazoned across my back. More religious iconography covers my arm including the Virgin of Guadalupe, as well as the Tree of Knowledge from the Garden of Eden with the tempting red apple hovering just out of reach of the leering snake. Orange and red flames lick the nape of my neck, burning up a pair of dice which add up to lucky number seven in honor of the heated card games the two of us enjoy.

During a shaky time in our relationship, a dagger is permanently etched on my chest proclaiming that I have a “Rock ‘n Roll Heart.” More words scrawl across my body like painted literature: the phrase “Mi Vida Loca” rings my neck like a permanent necklace in honor of my amazingly crazy life with my soul mate; the title “Crimes of Passion” wraps around my right wrist based on my favorite album of all time by Pat Benatar; and the statement “I dare you” challenges the viewer from inside the left wrist to coincide with the storyline of my erotic novel “The Three Red Lines.”

When Michael and I decide to get legally married in Brooklyn on our sixth anniversary on September 25, 2012, I need a permanent reminder of this major rite of passage, my second marriage. As a result, I have the Roman numerals IX II V (for 9/25) inked on the knuckles of my right hand. In the tattoo world, it’s widely speculated that once you tattoo your hands, your normal life is over. Not for me. Mine’s just beginning, hands down. Besides, I opted out of a normal life anyway sometime around the month of May back in the year of 1990.  That was when I sat down to get my first tattoo. 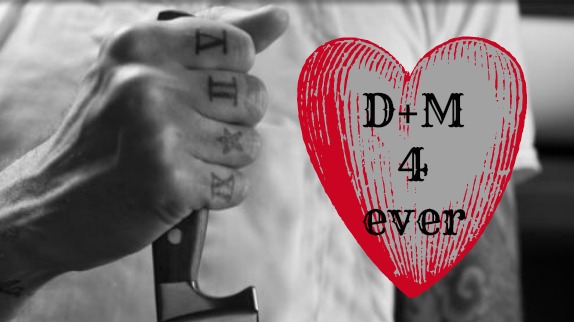 As for the next rite of passage in my life, I look forward to it with a frisson of excitement and anticipation. Regardless of what that may be, I’m pretty sure the incident will be commemorated with new ink. For why stop now? My body tells a story, a story of change and growth, hurt and love, religion and hedonism—my life’s story, or at least my life so far as interpreted by tattoo artists needling their visions onto my skin. I’ve almost made it to the half-century mark, and when I look back at that inexperienced kid getting his first tattoo 20 years ago, I have to smile. Little did I know how much that one small act of recklessness would not only be a major part of my life but also completely change it for the next twenty-something years.

And I’ve got the body of art to prove it.