Whatever happened to Maria

after “West Side Story”? 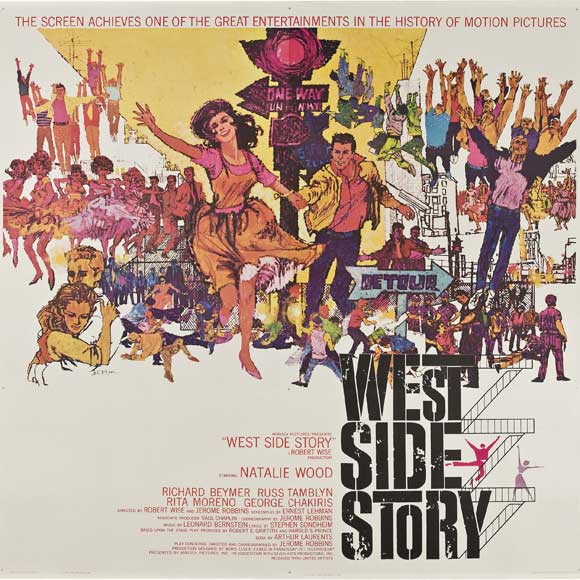 Does anyone else wonder what happened to Maria at the end of “West Side Story”? I vote for drug-addicted hooker after what she went through.

So said my Tweet. Those 140 characters really got under my skin. If you’ve seen the movie recently, you may be wondering the same thing.

If you recall, at the end of “West Side Story,” the young and lovely Maria wanders out of the hauntingly lit basketball courts in a stunned daze after her boyfriend Tony dies in her arms of a gunshot wound, the victim of gang violence after he killed Maria’s brother Bernardo. The lovebirds’ plans of running away together after the scheduled rumble between the Jets and the Sharks skids to an ill-fated stop, and their dream of getting married and living together free of prejudice literally dies away in that dark night, ebbing away like blood from a bullet hole. The final scene is gut-wrenching, and when Natalie Wood (who portrayed “Maria”) flings herself over the prone body of her dead lover, the agonizing screams she releases seem to reverberate with the red siren’s flashing light in the distance. 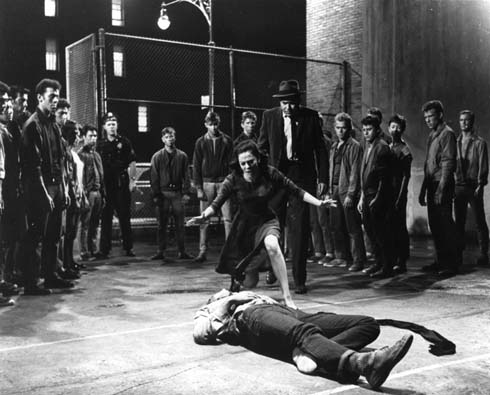 (As an aside, check out how fierce Natalie was brandishing a gun while chastising all the gang members in a rehearsal shot. That bitch knew how to Work. It. Out.) 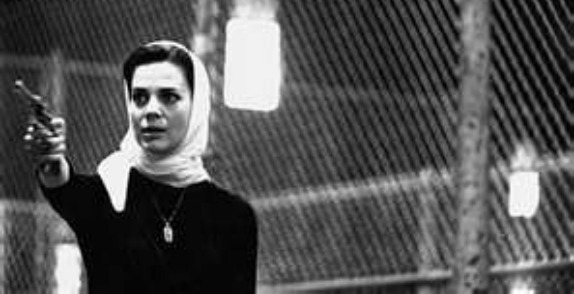 Even though the Caucasians and the Puerto Ricans end up carrying Tony’s body away together in a show of solidarity, the effort may be a little too little, a little too late. For what in God’s name is Maria going to do now?

Think about it—she’s a foreigner in a strange land, an innocent and inexperienced teenager working at a bridal shop in a dangerous section of New York City, and she’s become unwittingly embroiled in a race and class war she had attempted in vain to extricate herself from by using the almighty power of love. After the fallout from that one fatal night, however, she’s stuck. With no brother to watch over and protect her, and no partner to love and take her away from their sticky situation, she’s just another lonely immigrant with parents who can’t speak English and no real chance of education or a successful career. At least not back in those days and not under those conditions.

To put it bluntly, she’s fucked.

After watching the 1961 United Artists musical film the other night on Turner Classic Movies (directed by Robert Wise and Jerome Robbins and winner of 10 Academy Awards), I couldn’t help but wonder what happened to Maria after that night. Obviously, everything changed. Her beguiling innocence would never be reclaimed. The broken family unit would suffer. The possibility of another gang war over the same turf appears imminent. Despite all the bloodshed and lost lives from that night, there is no denying that the Sharks and Jets had a thirst for blood from the moment they set eyes on each other. Would Maria become a pawn in this struggle? How could she not? She’s the one who truly set the wheels of fate in motion, and the derailment could be traced back directly to her (and to a stinging lie from the bereaved and very-nearly-raped Anita, Bernardo’s girlfriend). I do not envy Maria. Love is lost, lives are gone, and sometimes the innocent are forced to pay for the transgressions of others.

Which leads to this thought-provoker:  Flash forward five or ten years…what is Maria doing now? In my mind, there’s no question what happened to her; she became a drug-addled prostitute. That conclusion is not that far-fetched either. For all we know, her never-seen-but-spoken-about-in-hushed-terms parents—religious fanatics, from the sound of it—kick her out of the house. With nowhere to go, Maria floats from tenement to tenement amongst the Sharks and their girls, losing her job along the way, slowly starving to death before she learns to trade sexual favors for food, alcohol, and drugs. The food and drink she can (almost) do without. It’s the drugs that she needs now. Nothing else warms her from the inside out and drowns the nightmare of her past like marijuana, cocaine, speed, pills, and heroin. Especially heroin. Once she learns to shoot up by herself, she enjoys stealing Anita’s cheating husband away a few nights a week while working for the notorious pimp Chino. Yes, that Chino, the one who shot Tony dead all those years ago. In Maria’s eyes, she deserves to be working for the man who effectively murdered her capacity to love. Strung out, skinny and malnourished with rotting teeth and matted hair, she still tricks herself out to johns several times a day due to her feral nature and affinity for sexual deviancy. Such bawdiness and lewdness pay more, she knows that. And yet, beneath her sad sack exterior, Maria still retains some of that sweet, girly goodness she possessed all those years ago, hidden like a seed buried deep within her. She’s the proverbial hooker with a heart of gold.

Too bad she’s also got herpes.

No matter. She don’t care. Nor do her clients, rich white businessmen who batter her about like panthers with their prey, drawing blood and erroneous conclusions. They think she’s a sexual predator who likes it dirtier than any whore they’ve had before. They think she’ll do anything, that the light in her fuzzy eyes will never go out. The don’t wonder about her home life or her family or the track marks that crisscross her scrawny arms that she constantly rubs as if she’s cold. These cruel and heartless men have no clue that she was a skilled seamstress with tiny, workmanlike stitches or that she once loved a man so much that she forgave him for murdering her own brother.

These men don’t know her, they only know her name.

They cry “Maria!” when the music’s playing loud in their fancy hotel rooms, loud enough to cover the muffled sounds of her soft cries. Or they whisper her name as they would the rosary, fondling her bead by bead. She tries to shut them up but it’s no use. “Don’t say my name like that,” she says with a haunted look in her eyes. But they never listen.

After all, they just met a girl named Maria, and suddenly the name will never be the same to them.

One thought on ““Maria’s Side Story””