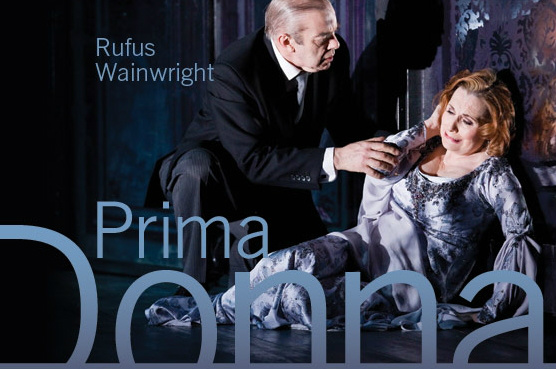 On an unseasonably warm February night in Brooklyn, my husband Michael and I had the opportunity to attend one of the four shows for the U.S. premiere of singer/songwriter Rufus Wainwright’s new opera entitled Prima Donna.

Here’s an overview from the New York City Opera website:

Singer-songwriter Rufus Wainwright makes his first foray into opera with Prima Donna, a meditation on the fine line between fame and failure. “A love song to opera, soaked in the perennial operatic themes of loss, betrayal, delusion and nostalgia, and saturated in the musical styles of opera’s golden age” (The Times, London), this new production by celebrated director Tim Albery makes its U.S. premiere after thrilling audiences at the Manchester International Festival, Sadler’s Wells, and Toronto’s Luminato Festival. Rising star Melody Moore, who received accolades for her performance in last season’s Séance on a Wet Afternoon, sings the tour-de-force role of a once-acclaimed soprano, haunted by her past success and her present reality as she seeks to return to the spotlight. www.nycopera.com

An intimate chamber piece with only four main characters and one set, the French-language work centers on aging opera soprano Régine Saint Laurent, superbly rendered with world-weary gravitas by Melody Moore (could a more perfect name exist for a singer?) as she confronts her demons while considering a return to the stage.

Bastille Day, 1970. Paris. The setting alone sent shivers down my spine. The curtain rises on a beautiful, graceful, but lonely woman alone in her once-grand apartment. Now tarnished and shabby, the apartment has become a tomb for the recluse who is attended to only by a loyal butler and a novice maid. Once the toast of the town, Régine has now fallen into obscurity since her triumph and tragedy six years earlier when she starred in Aliénor d’Aquitaine, an opera written exclusively for her based on the woman who was both Queen of England and France. On that fateful night which was recorded on vinyl for all posterity, Régine sung the part to perfection. On the second night, however, she inexplicably broke down during the finale duet and could not finish the performance, leaving the production for good and forever sealing her fate. And now she is slated to return to the stage for the first time in six years in the role that made her and broke her.

What progresses during this night of contemplation encompasses the entire opera, with things taking a heated and confusing turn when a journalist comes to interview Madame Saint Laurent about her upcoming return to the stage, a writer who is not only a huge fan but one who also knows the tenor part of Aliénor d’Aquitaine by heart. Memories are stirred and parts are sung to disastrous results. Whether Régine’s troubles are physical or psychological are unexplained, but when they converge in a dramatic flashback of the famous duet from her golden age, the result in the present is the painful realization that she will never be able to sing the part again. Ever.

The opera closes on a solitary woman, bereft of friends or servants, watching the Bastille Day fireworks outside of her balcony window. Will she jump? Will she live to see another day? Or will she grow old, alone and lonely, in the Parisian mausoleum of her own making? That, my friends, is up for interpretation.

I thoroughly enjoyed the opera in so many aspects, despite my knobby knees bent into a pretzel shape from the tiny seats in the balcony. The set was grand, glorious and moody, the costumes spot-on for the time and place, and the music was, by turns, luscious and playful, ominous and expressive, and delightful and evocative. Kudos to Rufus! I’m quite impressed; I have no idea how he wrote a two-hour opera, for heaven’s sake. All I know is that when and if the soundtrack is released, this opera newbie is going to indulge in a copy. After all, it could be the only one recorded for posterity.