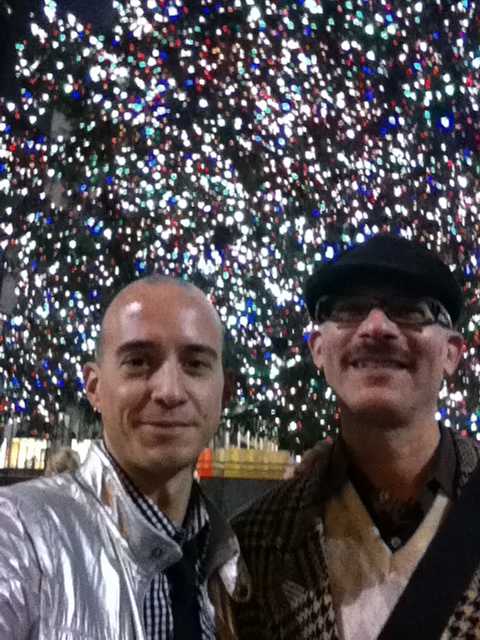 The Rockefeller Center Christmas tree is up, y’all!  And as Barbra Streisand once said, hello gorgeous.

Welcome to NYC, tree from Pennsylvania!  You really lit up the night on Monday, December 5, 2011 when my hubby and I came to visit you in Rockefeller Center.  And because it was a weeknight and the weather was seasonal, there wasn’t much pushin’ and a-shovin’ as there normally is.  That was a holiday present all on its own.

After we soaked in the beauty of the tree, my hubby and I walked up Fifth Avenue (hand-in-hand, mind you) to view the fancy stores all lit up until we hit our destination, Bergdorf-Goodman, the holy grail of Christmas windows and a yearly ritual with us.  Once again, they did not disappoint.  Michael took a photo of each window, but I don’t have possession of those yet.  Simply stunning.

Deciding we needed a holiday nip and since we were already on the Upper East Side, we decided to have a cocktail at The Townhouse.  For those of you not in the know, The Townhouse is an establishment that caters to an older gay clientele.  And I mean older.  We crept past the main bar and ushered ourselves into the back room where we were greeted with a grand piano and a slew of patrons singing along heartily to old Broadway showtunes.  With a souza on the rocks in our hands from the young Latino bartender, we snuggled into a couch and proceeded to be Waldorf and Statler from “The Muppet Show,” commenting on everything we witnessed in that room.  Quite fascinating.  After our very large drink, we went across the street to Evolve, a much younger gay bar.  Unfortunately, while there were some people in there (and a couple making out in the corner), the music was so quiet you could barely discern what was playing.  Another young Latin fellow was the behind the bar there too – those Upper East Siders sure do like ’em!

After a Blue Moon, we grabbed the 6 subway heading downtown and hightailed it to La Palapa on St. Mark’s Place.  Even though Michael was off of work that evening, we both wanted to see his fellow server Jason and I had to finally meet the new bartender named – wait for it, wait for it – Dario.  “Dario, meet Dario” was something I never thought I’d hear Michael say, but it happened.  He’s Italian and French, grew up in San Francisco, his brother was in “Jersey Boys” on Broadway for 6 years, and they live in Park Slope.  He’s adorable and sweet…just like me! haha  After two rounds of frozen ginger margaritas for me and souzas for Michael, we “kidnapped” Jason and took him to Eastern Bloc for a nightcap.  Fun!  Especially with all the porn playing on the TVs behind the bar.  Then it was time for all of us to walk back up to 14th Street and hit the L train for Brooklyn and some much needed zzzz’s.  Well, that didn’t quite happen, as first we stopped by Sammy’s bodega on N. 6th St. and Kent to grab some sandwiches and chips, and then I took advantage of Michael.